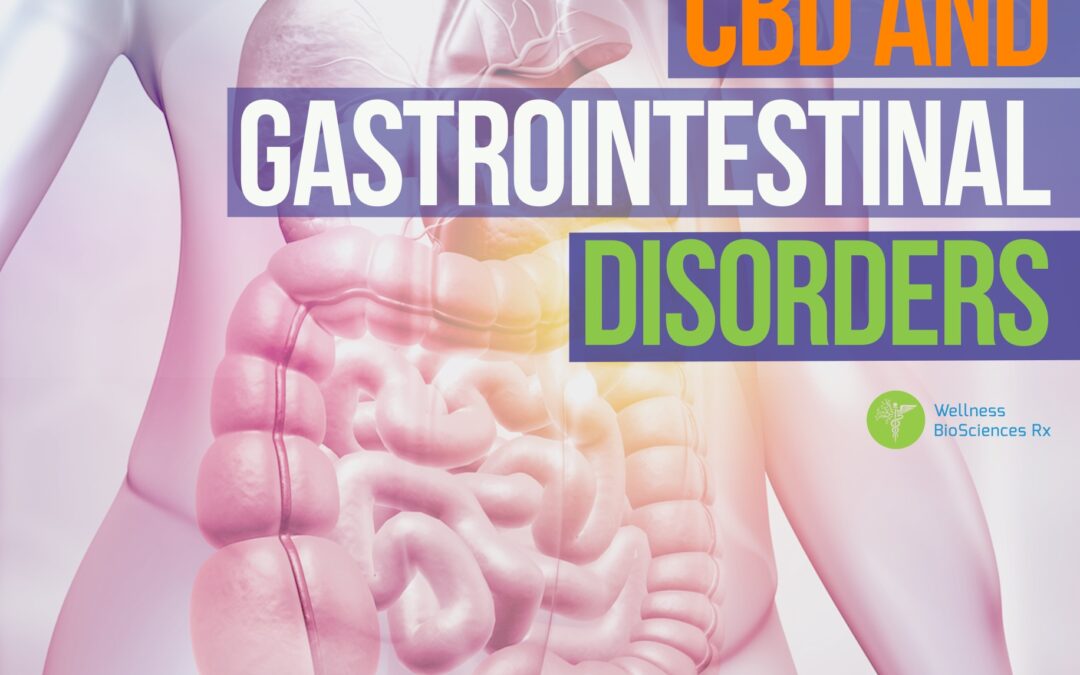 An excerpt from Cannabis is Medicine by Dr. Bonni Goldstein

The gut has two main functions, namely digestion of food and host defense, protecting us from foreign invaders like bacteria and viruses. The endocannabinoid system, which is widely distributed throughout the gastrointestinal system, is a key player in keeping these two important functions regulated. It is found in the gut’s nerves and in the cells of the immune system, working to maintain homeostasis of gastric motility (the muscular contractions that work to move food through the bowel), intestinal pain signaling, intestinal inflammation, and maintenance of the barrier of the gut lining.

The nerves in the gut are called the enteric nervous system, sometimes called the “second brain.” Cannabinoid receptors (CB1 and CB2) are found throughout these nerves. All disorders of the gut are thought to involve the enteric nervous system, making these receptors an attractive target for treatment when illness is present. Scientists have found that the number of cannabinoid receptors can increase (upregulate) in certain intestinal illnesses, indicating that the endocannabinoid system is mounting a response to try to restore balance.

In addition to cannabinoid receptors, other receptors, such as PPARs, GPR55, and TRPV1, are found throughout the gut and are involved in intestinal inflammation and pain. Since cannabinoids, such as tetrahydrocannabinol (THC) and cannabidiol (CBD), interact with these receptors, CB1 and CB2 are also therapeutic targets for treatment by anyone using cannabis medicine for gastrointestinal disorders.

Almost 80 percent of your immune system resides in the gut. The endocannabinoid system, including the CB2 receptors, is also present in these immune cells, ready to go into action to decrease inflammation when needed. However, if your endocannabinoid system is not working properly, it may not be able to mount the appropriate response to these triggers, leading to chronic intestinal symptoms.

Interestingly, people who have a mutation in the gene coding for one of the endocannabinoid system components are more likely to have IBS and chronic abdominal pain – evidence that endocannabinoid dysfunction may be one of the root causes of gut disorders.

RELATED STORY
Trade in Your Ibuprofen for Cannabis

GERD is very common, affecting 20 percent of all adults. GERD occurs when the stomach contents flow backward into the esophagus, causing symptoms of heartburn, chest pain, difficulty swallowing, and/or a sensation of a lump in the throat. GERD is often treated with medications; however, there are reports of possible increased risk of dementia and cancer from these drugs. Other interventions include altering the diet, remaining upright after meals, losing weight, and stopping tobacco use.

If your endocannabinoid system isn’t working properly, it may not be able to mount an appropriate response to inflammatory triggers, leading to chronic intestinal symptoms.

Animal studies have shown that cannabinoid stimulation of the CB1 receptor inhibited acid secretion and decreased damage and inflammation in the lining of the stomach. Preclinical research also showed that cannabinoid activation of the CB1 receptor kept the lower esophageal sphincter (the “gate” between the esophagus and stomach that works to keep stomach contents from flowing back into the esophagus)  from relaxing, thereby decreasing reflux. In one human study, synthetic THC given to healthy volunteers was shown to decrease the reflux rate (although there were issues in the study since the dose was very high and caused side effects). It is clear that more research is needed to understand the role of cannabis in the treatment of GERD.

Clinically, some medical cannabis patients with GERD report benefits, although some do not. (As with all conditions, it is unclear as to exactly why some patients respond to cannabis and others do not.) Anecdotal reports from positive responders state they have fewer episodes of heartburn, and if they have an episode, taking cannabis decreases their discomfort.

Most patients finding benefits are including some THC in their cannabis regimen, as this seems to be the cannabinoid most helpful for GERD, at least anecdotally. Some patients report a low-ratio CBD:THC product (such as 1:1, 2:1, or 4:1) helps decrease GERD symptoms with less intoxicating effects compared to THC-dominant products. Two aromatic cannabis terpenes, limonene and terpinolene, may also be beneficial for GERD symptoms.

IBD is a general term that refers to chronic inflammation of the bowel. The two main IBD conditions are Crohn’s disease and ulcerative colitis. The Centers for Disease Control reports approximately three million adults were diagnosed with IBD in 2015, up from two million diagnosed in 1999. The exact cause of IBD is unknown, but recent scientific investigation reports the changes in the gut are due to “uncontrolled activation of intestinal immune cells in a genetically susceptible host.” Remember that immune cells are regulated by the endocannabinoid system, suggesting that endocannabinoid dysfunction may be a root cause of IBD and may serve as a therapeutic target.

My patients report that their symptoms, including nausea, poor appetite, abdominal pain, diarrhea, and bloating, respond to cannabis treatment.

Crohn’s disease can affect any part of the gut but most commonly the small intestine, causing inflammation, ulcers, pain, bleeding, diarrhea, and weight loss. Ulcerative colitis is a chronic inflammatory condition affecting the large intestine, causing symptoms similar to Crohn’s. Both conditions are associated with an increased risk of colorectal cancer. According to a recent article, “current therapeutic options are insufficient for a successful treatment leading to a high rate of disability and intestinal surgery in IBD patients.”

Activation of the CB1 and CB2 receptors in animal models of colitis reduces inflammation. In a review of 51 scientific studies on cannabinoid treatment of colitis (only two were in humans), twenty-four different compounds, including synthetic cannabinoids as well as THC, CBD, and CBG, were found to be effective in reducing the severity of colitis.

Studies done in a number of different countries show about 10 to 12 percent of people with IBD are using cannabis to treat their symptoms. Studies in humans are limited but promising:

These reports stated that “recreational” cannabis was used. There was no mention of the type of cannabinoids used (THC, CBD, or other), nor was delivery method (smoking, edibles, etc.) or duration of use reported. Both significant benefits and risks were found, warranting further human clinical trials.

I have evaluated many patients with gastrointestinal disorders who have had successful results with cannabis treatment. Almost all patients with Crohn’s disease or ulcerative colitis who have been seen in my office have exhausted conventional options prior to seeking cannabis treatment, finding that they either were nonresponders or experienced intolerable side effects. Similar to the findings already mentioned, my patients report that their symptoms, including nausea, poor appetite, abdominal pain, diarrhea, and bloating, respond to cannabis treatment.

Many patients prefer to inhale THC since the onset of relief is immediate. Patients who are reluctant to use THC-rich cannabis can use lower CBD:THC ratios, such as 1:1 or 4:1, with similar benefits but less chance of intoxication.  THCA (the unheated, nonintoxicating version of THC ) was  found to be the main phytocannabinoid helping to regulate intestinal inflammation. With the increased availability of tinctures containing THCA, and CBDA as well, patients are finding that daily use of these raw cannabinoids, sometimes combined with CBD, is effective for anti-inflammatory effects, helping to prevent flare-ups.

As the most common diagnosis made by gastroenterologists, IBS affects thirty-five million people in the US alone. IBS is characterized by episodes of abdominal pain, bloating, excessive gas, and altered bowel habits (constipation, diarrhea, or mixed type). No clear cause of IBS has been identified, although endocannabinoid deficiency is suspected. There usually are no abnormalities on blood tests or an endoscopy, making IBS a diagnosis based solely on the patient’s history and symptoms, after ruling out other causes. IBS sufferers often struggle with other conditions, such as fibromyalgia, migraine headaches, temporomandibular joint disorders, chronic fatigue, gastroesophageal reflux, anxiety/depression, or chronic pelvic pain. Chronic stress has been linked to both the development and/or the exacerbation of IBS and should also be a focus of treatment.

There are three published human studies of cannabis use for IBS, all employing synthetic THC as the study drug. Not surprisingly, one study reported all participants to have had side effects and no benefits; the study dose of 10 milligrams THC was clearly too much for the non-cannabis users who participated. The second study used lower doses, 2.5 milligrams or 5 milligrams of synthetic THC compared to placebo, and found participants with IBS diarrhea or IBS mixed type had a reduction in colonic motility, meaning THC slowed down how fast food moved through the gut. And the third study involved giving low-dose dronabinol (pharmaceutical THC) for two days and had no effect on IBS diarrhea. As mentioned before, findings from studies using single synthetic cannabinoid compounds are difficult to translate to outcomes in patients using whole-plant preparations.

Clinically, many medical cannabis patients with IBS report benefits, most stating simply that “it helps calm the gut.” Some patients report substantial efficacy from low doses of THC taken in the evenings or just as needed when their gut is acting up. Others report using CBD preparations on a daily basis to control their symptoms. Additionally, some patients have reported that either THCA or CBDA, or both in combination, has helped with IBS, often with the patient achieving improvements in symptoms with low doses. Proper diet, regular exercise, and stress management support the endocannabinoid system, and in cases of IBS, patients find these additional interventions to be quite effective when combined with cannabinoid therapy.